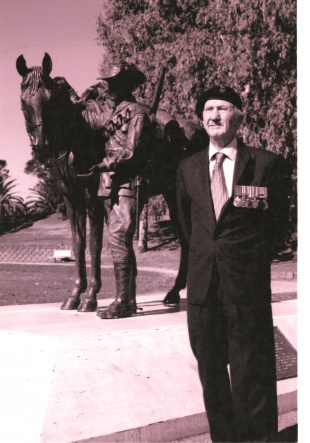 Colonel John Haynes AM (Ret'd) 90 years of age when he died. His memorial service was held at St James Church, King Street Sydney where the RAAC NSW Association's Chaplain, Reverend Andrew Sempell, led a moving tribute to a true icon. Some 180 people attended the service including LTGEN Laurie O'Donnell (CGS 1987-90) and MAJGEN Roger Powel (past HOC RAAC), Pedro Rosemond (past RSM Army), as well as Dame Marie Bashir the former Governor of NSW.

John is perhaps unique in that he enlisted in the Regiment (then 1AR (RNSWL))Citizen Military Forces or CMF on 15 July 1948 and retired from the Australian Regular Army on 30 October 1984, some 36 years later. His period of service encompassed immense change for the Army and the Royal Australian Armoured Corps. He enlisted in an essentially WW2 Army, with the 2nd AIF officially disbanding the year prior, and a year before the creation of 1st Armd Regt, ARA in 1949. He joined the Corps when the Matilda was our main Battle Tank and the .303 was our service rifle. He had the rare distinction of having served in almost every RAAC unit within our Corps. His overseas service including a visit to Vietnam in Aug 70 and over a year as Assistant Defence Attaché in Singapore 1973-74.

COL John Haynes AM was, in every definition of the word, a stalwart of the veteran community and the RAAC. For 36 years in uniform and then another 36 years thereafter fighting for the welfare of both serving and ex-serving members of the Defence Force. For John there were still more hours in the day and energy left. His other extra-curricular activities were many (he was involved in some 25 different service related groups) but notably he was fighting for benefits for war widows and their dependants. For his untiring welfare efforts John was awarded the Order of Australia Medal in 2005.

John also worked tirelessly for the recognition of service by Defence Force members. He took a leading role in the fight to establish the National Service Medal. As a member of the New Medal Group Committee he successfully fought for, and gained, the 4 years Service Medal for all Australian Defence force members. Added to this was his perseverance, and his persistence, as a leader of the RAAC Association in achieving the award of the Army Combat Badge for suitably qualified war service veterans.

As President of the Royal Australian Armoured Corps Association (at both State and National levels) he became the driving force of a 20 year quest to, as he would say, "right the wrong" of there being no memorial to our Boer War veteran forbears in our nation's capital. The magnificent Boer War memorial that was given over to the people of Australia on 31 May 2018 would not have been achieved if not for John's drive. In 2019 he was deservedly awarded a Member of the Order of Australia for this tireless st work. Did you know that the face on the lead trooper of that Boer War Memorial is his uncle, Michael Stuart Haynes, who served in the Boer War? And the name of that horse is Toby.

The City of Parramatta, some 20 kilometres west of Sydney, and the population epicentre of the greater Sydney conurbation now has its own part of the National Boer War Memorial. Parramatta's horse was the initial bronze half size example produced by Louis Laumen when preparing the sculptures for the National Memorial. Paid for and presented to the New South Wales Lancers' Memorial Museum by Colonel John Haynes AM. Taking pride of place, the statue sits on a plinth outside the Museum building at Lancer Barracks, 2 Smith Street, Parramatta. The exhibit is secure within this defence facility, it can be inspected when visiting the museum.

The Horseman represents Trooper Malcom Stewart Haynes of A Squadron, 6th Imperial Bushmen and his horse "Toby" in Australian Commonwealth Horse (ACH) rig. The ACH was the first force raised by the new Australian Commonwealth, it built on the traditions of the colonial units who had been in action in South Africa since the New South Wales Lancers' (NSWL) Fighting 29 first fired their Martini-Enfields at Belmont on 23 November 1899. The NSWL supplied the soldiers of A Squadron of the 5th ACH. 4 Troop, A Squadron, 5 ACH was enrolled at Parramatta in January 1902.

The horse arrived outside the Museum and was secured in place during a tour by members of the University of the Third Age on 28 February 2019; most impressed, tour group members were excited to be the first to see it in place.

The Statue was unveiled by Colonel Haynes on 5 March 2019 at a parade by the 1st/15th Royal New South Wales Lancers (the unit he joined as a trooper in 1948) to commemorate significant anniversaries: 199 years since Lancer Barracks were completed, 134 years since the Regiment's formation and 100 years since members of the Regiment were first in action in South Africa. The parade commanded by the Regiment's Commanding Officer, Lieutenant Colonel Andrew White was attended by The Hon Julie Owens MP (Federal Member for Parramatta), The Hon David Elliott MStJ MP (NSW Minister for Veterans Affairs), the Regiment's Honorary Colonel Brigadier Philip Bridie AM and the Commander 5 Brigade.

Colonel John Haynes AM (Ret'd) joined the Royal New South Wales Lancers in 1948 as a trooper, he was Commissioned in the Regiment in 1950. Soon after he transferred to the Regular Army, serving in 13 different Royal Australian Armoured Corps units.

He did a tour of duty in Vietnam in the early 1970s. The late 1970s saw him as Chief of Staff 2 Div. His last posting was Inspector of Administration for the Army.

He retired from the Army in the mid 1980s and became the President of the Royal Australian Armoured Corps Association, New South Wales Branch RAACANSW), later serving as President of the National Association. In this role he instituted a number of successful initiatives for soldiers including the Army Combat Badge, the medal for National Service and the Australian Defence Medal.

For these good works he was awarded the OAM.

At the opening of the Light Horse Interchange west of Sydney in December 2005, Colonel Haynes struck up a conversation with the then Prime Minister John Howard. They noted that the service of Australian Soldiers in the Boer War was not commemorated at a memorial in the nation's capital, Canberra.

The National Boer War Memorial project was born. Colonel Haynes gathered a group of volunteers initially under the banner of the RAACANSW and work started. Committees were formed throughout Australia, and funds raised. Those whose relatives had served in the war were encouraged to tell their stories and these were published on the Memorial Association's internet site, a place where all matter of material was to appear. To garner support volunteers gave presentations to any group interested. A design competition was held. The designs submitted did not meet with approval, an amalgam of designs was agreed on. Then the costing came.

For the result to be achieved a figure just short of $4M was needed. Many thought this a bridge too far. Not John Haynes, he called on support from every quarter and eventually on 31 May 2017, His Excellency, General the Honourable Sir Peter Cosgrove AK MC (Ret'd) Governor-General of the Commonwealth of Australia dedicated the memorial in Anzac Parade, Canberra.

For this effort, in the Australia Day honours 2019 Colonel Haynes was awarded an AM. Generous to a fault, he ensured that others on his committee were also honoured. Three (David Deasey, Tony Larnach-Jones and John Howells) received OAMs in the same honours list.