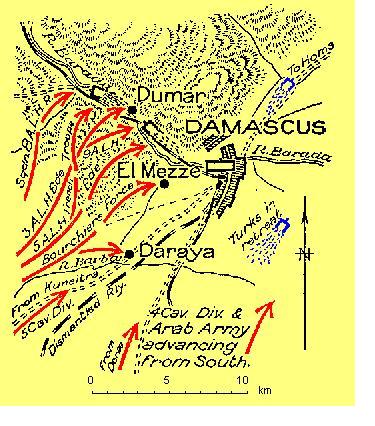 Damascus, capital city of modern Syria is located to the North of Palestine, and East of the Lebanon Range on the fast flowing Barada River. In September 1918, the city was described as set on a flat plain in a beautiful forest of orchards and plantations, vivid with sub-tropical flowers. Approaches from the South being described as open, with routes to the north being restricted to the Barada Gorge with road and railway, and the mountainous road to Homs.

Lieutenant General Chauvel, commander of the Desert Mounted Corps, (Chauvel was a founding member in 1885 of the Upper Clarence River Light Horse, precursor to the Northern Rivers Lancers) approached the city from the South along the route of the old Pilgrims’ road., and recognised that it could be isolated if the Homs and Gorge roads could be cut. This task was allocated to the Australian Mounted Division.

At 12:00 on 30 September 1918 the 3rd followed the 5th Light Horse Brigade toward the Barada Gorge. At 15:30, the 5th engaged a Turkish force south west of the Gorge, the Turks fought courageously. The 3rd managed to by-pass this engagement and head for the Homs Road. Again the path was blocked.

The light horsemen of the 5th Brigade moved to the heights covering the Gorge. This was but 100 metres wide with a swift flowing river, road and railway. In this confine, led by German machine guns mounted on the tops of motor-lorries and trains, was the mass of the German and Turkish army making its escape. When the leading elements defied a challenge to surrender, the Light Horsemen fired with fearful accuracy, shooting the column to a standstill, then to silence.

Brigadier General Wilson, commander of the 3rd Brigade had decided to move through the outskirts of Damascus on the morning of 1 October to avoid the Turkish positions blocking his route through the mountains to the Homs road. Unbeknown to Wilson the city’s commander Lieutenant General Ali Riza had already deserted and delivered his defence plans to his enemy, and the city had dissolved into anarchy. As the 5th Brigade rode through the streets they were hailed as victors by the local population Christian and Moslem who had grown tired of the excesses of Imperial Turkish rule. It took great discipline to negotiate the streets and pursue the enemy columns in flight toward Homs.

The battle was essentially over. The Turkish army was in retreat, and there would soon be an Armistice.